Whether your organization is based in Florida or Pennsylvania or Alaska, your constituents share the need to stay informed about their rights and benefits, and navigating the sometimes complex systems that sustain them. This information can help people access jobs, healthcare, housing - you name it.

So why not work together to get the word out?

Block by Block works with staff from Protection & Advocacy agencies to collaborate on short, easy-to-understand and very shareable videos on different disability rights related topics. When complete, each organization receives a version of the video, with their name, logo and contact information included. By working together, we share expertise, and share the costs.

There's two great ways to get involved. Join us in proposing and creating new videos - or order an existing video for your organization.

Together, we come with ideas and decide which videos to produce.

Through virtual meetings, we brainstorm ideas and review script drafts.

We make the video and share early cuts with sponsors for feedback.

When the content is locked, you receive a customized version of each video you sponsor.

The next process begins in the Summer of 2021.  Sign up to receive updates.

Preview and order any of our current explainer videos. When complete, each video will feature your organization's logo and contact information at the end so your clients can reach you. Every video comes complete with English captions, and select videos are also available with Spanish subtitles, Spanish narration or both. Check out options at checkout. 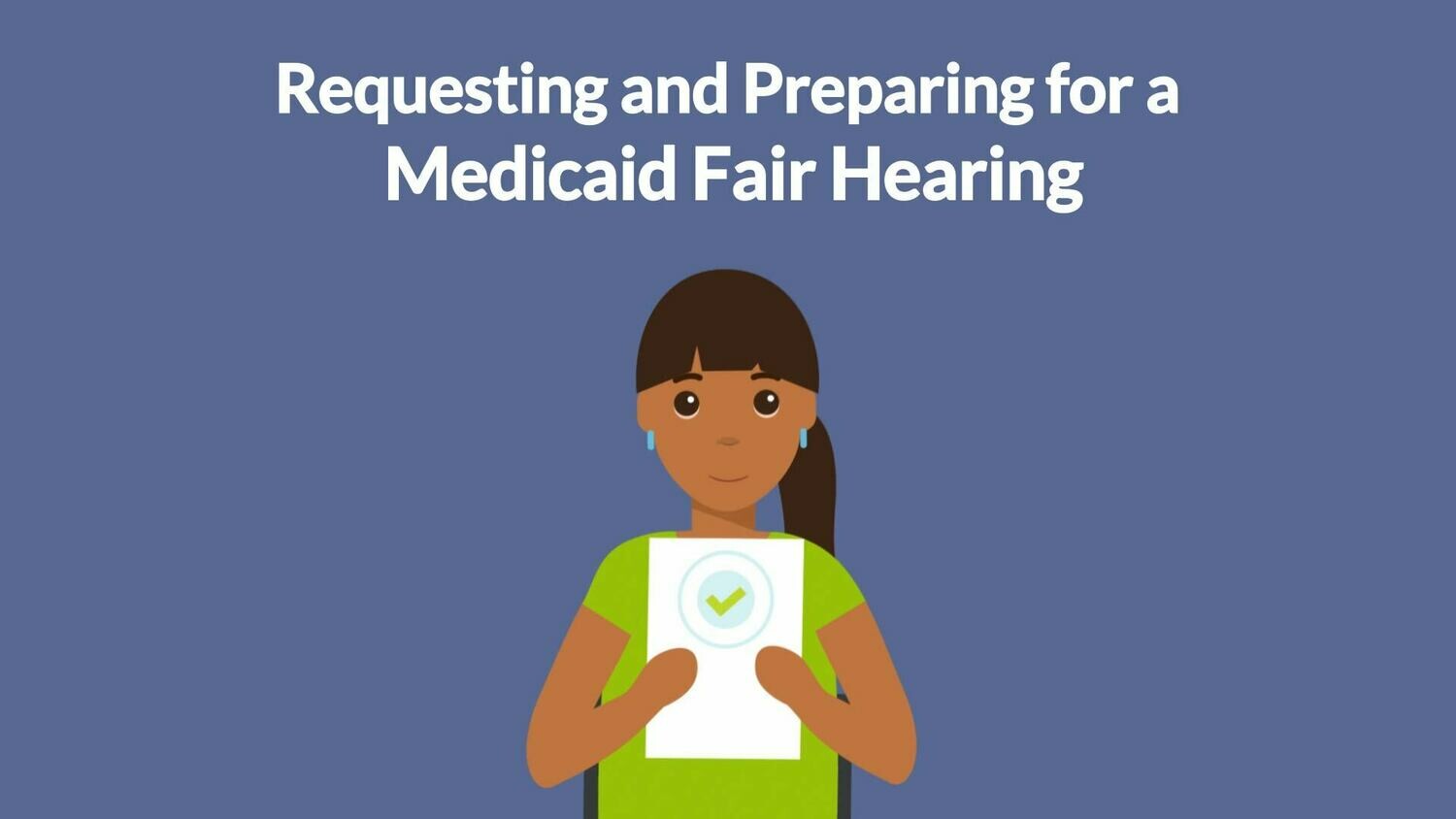 What is a Medicaid Fair Hearing?

If your Medicaid services or programs been cut or new requests denied, you need to know about Medicaid Fair Hearings.

- : Have your Medicaid services or programs been cut or new requests denied? Maybe your physical therapy hours have been reduced, or maybe your request for new glasses was denied. If so, you need to know about Medicaid Fair Hearings. A Medicaid Fair Hearing is a process that lets you fight against cuts or denials of the Medicaid services that you need. The outcome will decide which services you receive so it's important to take it seriously. If you think a decision about your services is wrong, you should ask for a hearing. But the Fair Hearing process can be confusing. So let's try to break it down. Medicaid managed care organizations or state Medicaid agencies, may sometimes cut or deny your services. If they do, you should receive a letter - called a Denial Notice. It's important to understand everything in the letter so that you're ready to advocate. Let's take a closer look! There are four things that should be in the letter. One: There should be a clear explanation of what is changing or has been denied. For example, maybe they are decreasing your physical therapy services from 3 days a week to 1. Or, denying a request for a new prosthetic limb. Two: There should also be a specific reason why they made that decision. If the letter just says that, "the service isn't medically necessary" and nothing else - that's not enough. Three: The MCO or state Medicaid agency also has to include which laws or rules they say support their decision. Four: It's important to know that you may have as little as 10 days after receiving the letter to request a hearing so that your services stay the same during the process. They need to tell you what they're doing, why they're doing it, and how you can respond. So, what about the hearing itself? Your Fair hearing is a chance for you to explain why you need the services they're denying or trying to take away. So before the hearing, make sure you gather plenty of evidence to support your case. Evidence might include receipts related to your medical care, or notes from a doctor. The hearing isn't always in a courtroom

- it's over the phone most of the time. But it's still a serious, confidential legal meeting. There may be several people participating in the hearing, including witnesses, the MCO or state Medicaid agency representative, and a hearing officer, who will listen to you and make the final decision. Make sure you explain your needs clearly and completely. The services you're fighting for impact your everyday life. After the hearing, the hearing officer will make a decision about your services. A written decision will be sent to you sometime after the hearing. They may disagree with you, and your services can be cut or denied. Or, they may agree with you, and your services can be approved! You deserve to have the services you need. Medicaid Fair Hearings play an important role in deciding what services you receive. So make sure you're ready to advocate!

Save this product for later